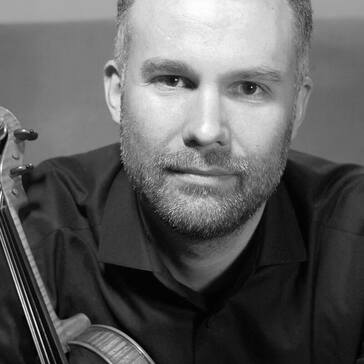 Adrian Dolan is a multi-instrumentalist and composer based on Vancouver Island, perhaps best known for his work with the award-winning roots ensemble The Bills over the past 19 years. His skills as a violinist, fiddler, pianist and accordionist have landed him on stage with some of the best in the business, and along with a passion for composing, educating and leading a new generation of folk music into the 21st century.
“Unquestionably one of Canada’s very finest fiddlers” Steve Edge, Rogue Folk Club, Vancouver
After Adrian joined The Bills at age 17, the band became one of the foremost touring groups in Canada, playing nearly 160 shows annually and extensively travelling around Canada, the US and the UK, and Europe. Their 2002 and 2004 releases both garnered JUNO Award nominations, Western Canadian Music Awards, and received worldwide airplay. Music videos for two songs from “Let Em Run” have been featured on CMT Canada. They’ve played for countless radio broadcasts, including CBC (This Morning, Q, Canada Live), Radio-Canada, BBC Scotland, Radio Sweden, NPR, and Woodsongs Old-Time Radio Hour. The Bills continue to tour in support of their latest release “Trail of Tales” (2016).
Classically trained on piano, violin, and viola, Adrian began composing at a young age, and performing professionally in his mid teens. After taking up fiddling with Daniel Lapp he was soon putting his piano skills to use as an accompanist, culminating with guest performances with the Victoria Symphony, and summer festival stages around the province.
For the past 16 years Adrian has been honing his creative and technical prowess in the studio as a producer and engineer, working with an ecclectic array of artists over the years spanning the folk and Bluegrass realms, into country, garage rock, storytelling, jazz, and comedy. Adrian’s skills as an arranger have been sought out in many projects to expand the sonic landscapes to include live string sections. As a multi-instrumentalist he has been frequently called upon for session work in Vancouver, Victoria, and beyond.
Currently, Adrian maintains a busy schedule of performing, arranging, producing, sound engineering, and teaching. He frequently travels to instruct at traditional music workshops across Canada, and has also served as Musical Director for the BC Fiddle Orchestra. Adrian currently performs with Ruth Moody (The Wailin’ Jennys), and has also toured and recorded with a wide array of artists including BCCMA winner Ridley Bent, The Arrogant Worms, Irish legends The Chieftains, Barney Bentall, Old Man Luedecke, Raffi, and Cape Breton’s Rankin Sisters. He recently was hired by Musical Director Bill Henderson to perform viola in the band for the world premiere production of Bruce Ruddell’s “Beyond Eden” which ran for 49 performances in Vancouver and Calgary as part of the Cultural Olympiad in 2010.
Adrian has served as concertmaster for Bach on the Rock Chamber Orchestra, and the Sooke Phiharmonic Chamber players under the direction of Norman Nelson, as well as performing on both viola and violin with the Victoria Chamber Orchestra and the Victoria Civic Orchestra.

The Bills Advance Band
This unique workshop class is for advanced students of all instruments (and voice) will focus on songs and tunes from the bands repertoire, recreated for the uniqueness of the Fiddleworks musical mob.

Advanced Tasty Twisty Fiddle
Enjoy the challenge of some mind bending modern tunes with at least a couple of golden oldie finger twisters thrown in there for good times.  Hoping for some layered up fiddle parts too!

Recording (Int-Adv, all Instruments)
Come play in the studio with the one and only Mr. Dolan!  This intensive class will delve into the world of sound engineering, from microphones to mixers... and best of all, create something to share!  All instruments welcome, ages 12+ up.
​
​Class Time: 3:00